View all blog posts under Accountancy 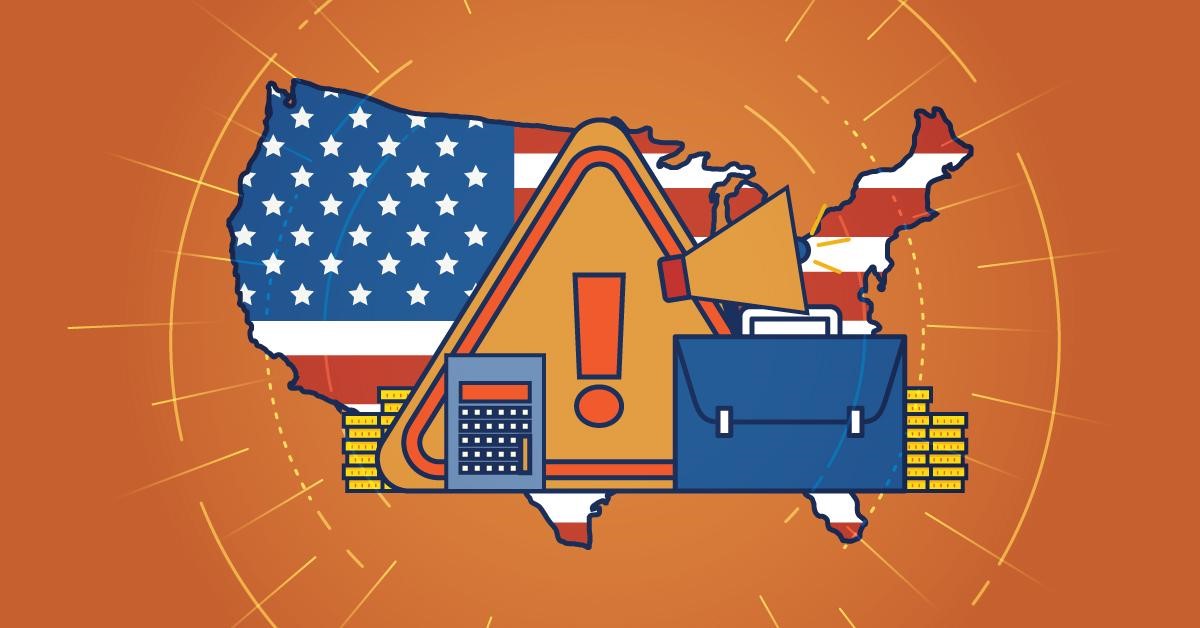 Organizations worldwide watch 5% of their annual revenue go right out the window due to a single cause:  fraud. That is one of the findings reported in the Association of Certified Fraud Examiners (ACFE) 2020 Report to the Nations, a global study on occupational fraud and abuse. Accounting fraud is defined as fraud that involves theft and other crimes committed by accountants or related to an organization’s accounting methods and practices.

The damage from accounting scandals extends beyond shareholders and employees, affecting local and global economies as well as investors,   and the accounting industry. The financial well-being of companies and individuals depends on preventing accounting crimes, detecting them quickly when they occur and responding effectively to contain the damage they inflict.

What Is an Accounting Scandal

An accounting scandal is a case of accounting fraud that’s so damaging to a company, an industry or the economy that it reverberates far beyond the principal players.

From a corporate perspective, accounting fraud is defined as the intentional manipulation of financial statements in a way that’s intended to falsify the appearance of the company’s finances. It’s typically motivated either by personal gain (theft) or by a desire to mislead investors and shareholders.

Accounting fraud is a crime in the U.S. under both federal and state laws. The legal information site HG.org explains the federal statutes pertaining to accounting fraud:

While most prosecutions for accounting crime originate in the U.S. Department of Justice (DOJ) and the U.S. Securities and Exchange Commission (SEC), state laws also prohibit accounting fraud by allowing individuals to file civil suits against firms to recover monetary damages resulting from fraudulent activity. In particular, states apply their own financial reporting requirements in addition to those required by federal law.

For many years, internal and external auditors detected and reported accounting fraud, but as the Institute of Certified Forensic Accountants (ICFA) reports, those audits only verified compliance with generally accepted accounting principles (GAAP) and the company’s own policies. Forensic accounting goes further, focusing on identifying fraudulent financial transactions.

The ways that forensic accountants and auditors detect and respond to incidents of accounting fraud include the following:

The regulations of most State Boards of Accountancy prohibit Certified Public Accountants (CPAs) from reporting clients whose financial practices violate the law unless the client grants them permission to do so. This has led to efforts by the American Institute of CPAs (AICPA) and the National Association of State Boards of Accountancy (NASBA) to create whistleblower protections for CPAs to report accounting crimes committed by their clients without receiving the client’s consent beforehand.

The CPA Journal notes that financial criminals are increasingly using artificial intelligence (AI), robotic process automation (RPA) and other advanced technologies to perpetrate fraud. Most of these crimes occur not in the accounting department but in the corner offices of CEOs and chief financial officers (CFOs), rendering internal audit controls ineffective. The same technologies intended to detect and prevent accounting fraud can circumvent built-in protections against financial crimes.

The regulations of most State Boards of Accountancy prohibit Certified Public Accountants (CPAs) from reporting clients whose financial practices violate the law unless the client grants them permission to do so. This has led to efforts by the American Institute of CPAs (AICPA) and the National Association of State Boards of Accountancy (NASBA) to create whistleblower protections for CPAs to report accounting crimes committed by their clients without receiving the client’s consent beforehand.

The CPA Journal notes that financial criminals are increasingly using artificial intelligence (AI), robotic process automation (RPA) and other advanced technologies to perpetrate fraud. Most of these crimes occur not in the accounting department but in the corner offices of CEOs and chief financial officers (CFOs), rendering internal audit controls ineffective. The same technologies intended to detect and prevent accounting fraud can circumvent built-in protections against financial crimes. 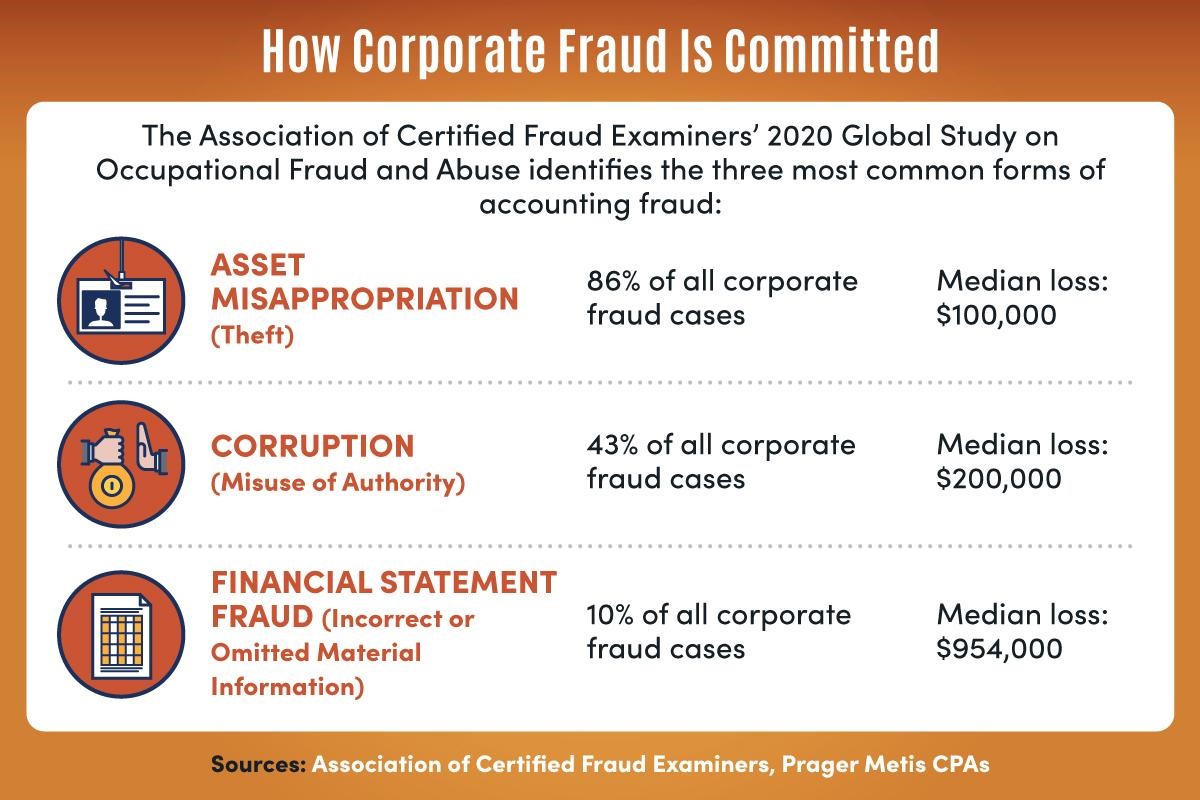 The worst accounting scandals in terms of monetary loss have occurred in recent decades, but there is nothing new about fraudulent accounting practices. Accounting crimes perpetrated by U.S. companies date back to the early 19th century. For example, in the 1860s, the railroad firm Crédit Mobilier defrauded the U.S. government of millions of dollars by grossly inflating the price of its work. A number of politicians profited from the scheme.

The damage that the following modern corporate accounting scandals have inflicted continues to be felt by their victims, by the accounting profession and by industries around the world.

Few financial crimes have had the impact of the Enron accounting scandals of the early 2000s. The scandals led directly to far-reaching reform of business financial practices via the  . They also led to the demise of one of the Big Five public accounting firms, Arthur Andersen.

A multiyear investigation by the SEC determined that General Electric Co. (GE) misled investors in 2016 and 2017 by failing to disclose that the true source of much of its reported profits was a reduction of earlier cost estimates. This was one of several GE accounting scandals in recent years.

In the years before the Tyco accounting scandal of 2003, the company had grown via acquisitions into one of the largest security firms in the U.S. Unethical behavior by former CEO L. Dennis Kozlowski and other top Tyco International executives nearly brought down the organization.

The WorldCom accounting scandal was one of the most financially costly in corporate history, ultimately involving nearly $4 billion in accounting fraud.

The Bernie Madoff accounting scandal remains one of the most shameful events in the history of the financial industry. For at least 17 years, Bernard Lawrence “Bernie” Madoff operated a Ponzi scheme that bilked 37,011 investors out of tens of billions of dollars.

The AIG accounting scandal is centered on the mortgage meltdown that began in 2008 and eventually caused the Great Recession that persisted for several years. The company had placed huge bets on risky mortgages in the form of a financial instrument called collateralized debt obligations (CDOs).

How Does Accounting Fraud Happen

Considering the tremendous damage to investors and economies that results from accounting scandals, as well as the fiduciary responsibility that accounting professionals pledge to their clients that subjects them to a higher standard of conduct than other people, it’s natural to  how accounting fraud happens despite the financial safeguards in place. The results of a recent study reported in Forbes indicate how business managers react when faced with earnings that fall short of expectations. The managers are more likely to hide the shortfall by failing to report expenses they already made rather than by prematurely reporting revenue they expect to make in the future.

The reason managers give for choosing the passive approach to hiding losses is that it’s easier to explain the omission to auditors as an accident rather than an intentional act. The researchers highlight the dangers of managers “strategically committing fraud” that auditors, regulators and other investigators can label as errors. The result is that “seemingly harmless” acts of fraud grow into full-fledged fraudulent schemes that persist and involve large sums of money, some of which the perpetrators pocket.

Since it’s impossible to prevent all accounting fraud, early detection of fraudulent activities is key to reducing the risk to companies. However, gaps in financial oversight allow the crimes to go undetected for years, as the Madoff Ponzi scheme demonstrates. These are the most common methods that perpetrators of accounting fraud use to conceal their crimes:

Along with failing to record expenses, the most common forms of corporate accounting fraud are  in the company’s financial statements and misrepresenting assets and liabilities. Other forms of accounting fraud include the following:

CFO Dive reports that 60% of actions that the SEC takes as a result of its whistleblower program for reporting suspected accounting fraud relate to improper timing of revenue recognition. Companies will accelerate revenue recognition if they’re falling behind their revenue targets and will delay reporting revenue if they’re ahead of their targets for a specific reporting period. 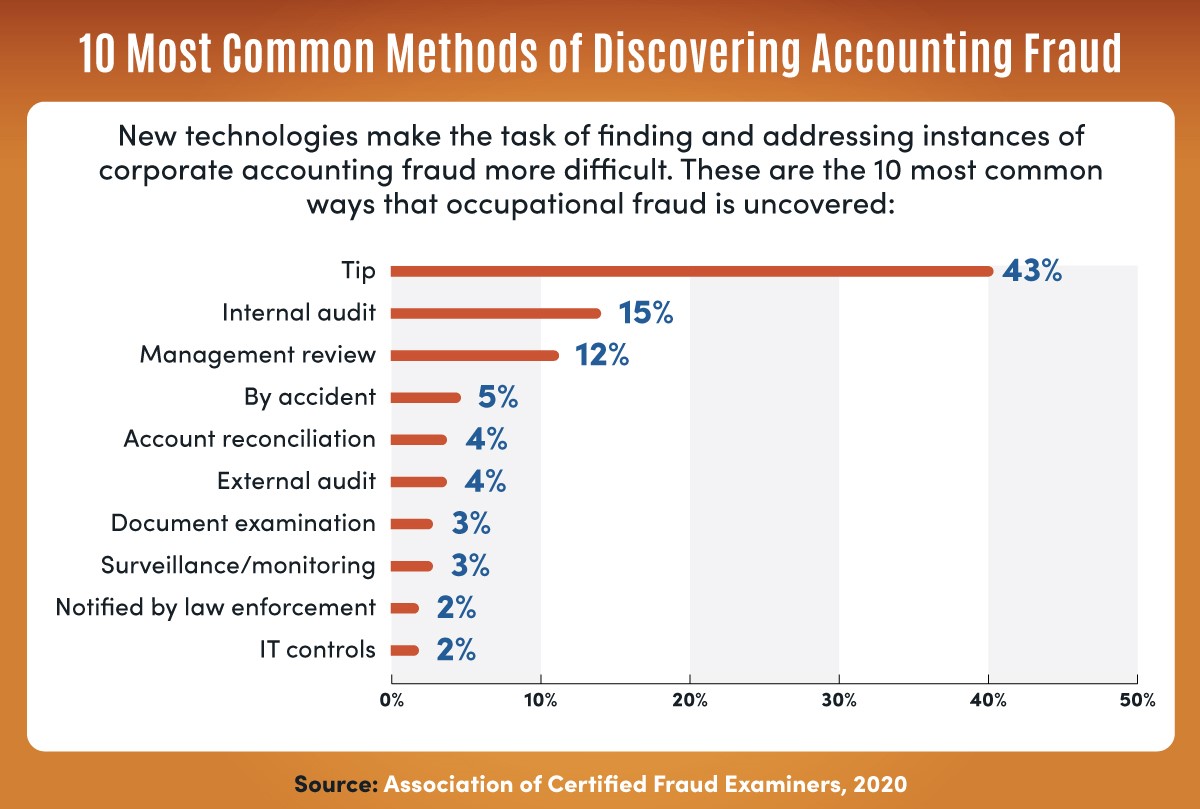 How to Detect Accounting Fraud

Knowing how to detect accounting fraud becomes more important as the risks of accounting-related crimes become more numerous and potentially more damaging. For example, the same advanced technologies on which companies rely to gain a competitive edge can be used to commit financial crimes that are nearly impossible to identify and quickly address.

CFOs and other corporate financial managers play principal roles and have primary responsibility for policing their companies’ accounting operations. The most important tools in their fraud detection arsenal are internal and external audits, some of which are performed by forensic accountants who specialize in discovering accounting fraud.

Impact of the Sarbanes-Oxley Act on Accounting Fraud

The Sarbanes-Oxley Act is intended to protect investors by requiring that corporate financial statements be accurate and reliable. These are among the major provisions of the act:

While the Sarbanes-Oxley Act defines rules for information technology (IT) departments to follow in ensuring that records are securely stored, the law doesn’t specify storage methods or other business practices to ensure compliance with the law’s provisions.

Accounting scandals that went undetected for years, even decades, and that led to hundreds of billions of dollars in losses for investors have shaken consumer and investor confidence in corporations to the core. Efforts to regain that lost trust begin with the important roles that forensic accountants and auditors play in ensuring the accuracy of a company’s financial reports and the reliability and integrity of its accounting operations. Accounting professionals are critical in supplying the close scrutiny of corporate financial disclosures that governments and the public demand.

Association of Certified Fraud Examiners, Report to the Nations: 2020 Global Study on Occupational Fraud and Abuse

Prager Metis CPAs, “The Anatomy of Fraud — Insights from the 2020 AFCE Global Study on Occupational Fraud”