What Is Blockchain, and How Has It Shaken Up Financial Markets? 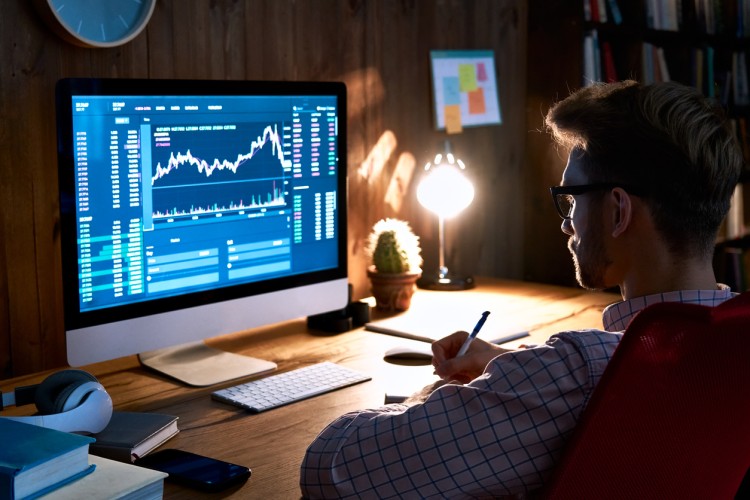 When Bitcoin made its debut in 2009, it brought awareness to blockchain, the technology used to confirm cryptocurrency transactions. Fast forward to 2022: Blockchain technology is now a nearly five billion dollar market that has been disrupting industries around the world, including health care, technology and transportation.

Advanced degree programs with coursework in blockchain are a great way to keep up with this new technology.

What Is Blockchain Technology?

Blockchain is a form of distributed ledger that is shared across a computer network. When a block of information is added to the ledger, it gets attached to the block before it and assigned a hash, or digital ID. Once a block is entered in the ledger, it can’t be edited, only recorded. Blockchain is used to validate and secure transactions across a distributed network, safeguarding sensitive data from being altered or stolen. The ledger becomes the final say on the data. Cryptocurrency relies on blockchain to ensure that e-coin transactions are accurate and legitimate.

Blockchain technology has many benefits. Advantages include:

Blockchain is a highly secure method of safeguarding sensitive data. First, the data is encrypted using public key cryptography. Because the chain is distributed across a network rather than residing on a single server, the data can’t be lost to an electrical or mechanical failure or a physical attack. Because of the digital signatures of each block and the way the blocks are linked in a chain, data can’t be easily hacked. Hackers would have to compromise every block in the chain on every computer in the network.

Although the data stored in a block is encrypted, each transaction in a blockchain can be viewed on publicly available search sites. Further, everyone in the network agrees that the transaction information is exactly what it’s supposed to be. This decentralized control means no single entity has the final say on the data. When recording cryptocurrency transactions, blockchain uses consensus mechanisms to confirm that a transaction is valid.

Blockchain is highly efficient at recording data transactions. Block time, as transaction time is called, can vary depending on the specific transaction. However, blockchain operates around the clock, and doesn’t stop based on local time or business hours. This makes blockchain an effective way to keep ahead of millions of transactions.

How Is Blockchain Disrupting Financial Markets?

Due to the advantages of blockchain, the financial sector is investigating the ways in which it can be adopted. Lowering transaction costs, speeding up the time it takes for transactions to clear and, perhaps most importantly, safeguarding sensitive data are all potential game changers for the industry. Some of these applications include:

Cryptocurrency competes with fiat currency, or currency that is backed by a government. Central banks such as the Bank of England are investigating creating their own e-coin backed by blockchain to compete with other cryptocurrencies as well as with credit card networks. Other uses for blockchain in banking include:

The stock market is highly regulated, which slows down transactions and creates a barrier for buyers and sellers. Proponents of blockchain say that its distributed nature can speed up transactions while safeguarding data and eliminating the potential for fraud. Uses for blockchain in this industry include:

Some of the ways that blockchain will revolutionize financial services are:

The financial services industry is vulnerable to hacking and ransomware attacks, as some high-profile attacks have shown. According to a survey by the data security firm Sophos, 34% of respondents reported a ransomware attack in 2020, and, of those, just over half reported that hackers successfully encrypted their data.

Cybersecurity professionals who work in the financial services industry must stay current on the threats, industry regulations and technology they need to prevent attacks. Some of the benefits of blockchain for cybersecurity are:

However, blockchain isn’t meant to be “one and done.” Even with the safety features and transparency of a distributed network, malicious actors can still penetrate these defenses. And the structure of blockchain does have some disadvantages for the financial services industry.

Be a Part of the Future, Today

What is blockchain, and how can cybersecurity experts use it to protect financial markets? The University of Nevada, Reno’s online Cybersecurity, Master of Science offers coursework in cryptography, blockchain and cybersecurity law to provide students with expertise in this emerging field. Learn more about how the program can prepare you for a rewarding career at the forefront of digital technology/

How to Become an Information Security Analyst

How to Become a Cybersecurity Analyst

Why Is Cybersecurity Important?

Forbes, “Trends in Blockchain: Why Big Banks Are Adopting This Technology”

GeeksforGeeks, “Role of Blockchain in Cybersecurity”

Ledger Insights, “Nasdaq Wants to Be a Blockchain Tech Disruptor”

Sophos News, “The State of Ransomware in Financial Services 2021”

Statista, Blockchain Use in Banking and Financial Services Market Size Worldwide in 2018 and 2019 with a Forecast to 2026

Technological Forecasting and Social Change, “How Blockchain Can Impact Financial Services — The Overview, Challenges and Recommendations from Expert Interviewees”

WNS, “How Will Blockchain Revolutionize the Global Financial System?”