For more than a century since the identification of the varicella zoster virus – commonly known as “chickenpox” – in the late 19th century, experts have struggled to reach consensus on treatment guidance. A DNA virus and member of the herpes virus group, the disease is known to primarily affect children and results in a blister-like rash, itching, tiredness and fever.

While typically a relatively minor inconvenience and not life-threatening, the hyper contagious nature of the disease combined with its more devastating impact on older adults and those with compromised immune systems made it a serious public health concern prior to the development of a vaccine. Data from the Centers for Disease Control and National Health Interview Survey for the period 1980 to 1990 indicated that an estimated 3.7 million cases occurred annually prior to the widespread use of the vaccine, with the CDC going on to claim that it resulted in 100 to 150 deaths per year. Yet even after the implementation of the vaccine, many immunization managers noted that the CDC’s guidance seemed insufficient given the infection rates they were witnessing — leading to some experts pushing back on the conventional wisdom, revolutionizing the VZV inoculation regimen to astonishing results.

Initial studies and recommendations
A live attenuated varicella vaccine was developed in Japan in the 1970s before finally making its way to the United States in the late 1980s. Upon being studied and finally approved by the CDC in 1995, the VZV vaccine was shown to be very effective at inoculating most populations against chickenpox. Among persons 13 years of age or older, 78 percent of vaccines seroconverted after the first dose and 99 percent seroconverted after a second dose administered 4-8 weeks later.

These clinical studies led to specific guidance and recommendations regarding inoculations: Anyone over the age of 13 who had not yet contracted VZV should be given two doses of the vaccine. Children under the age of 13 would be administered a single dosage.

Vital gaps in research, treatment
At first, this treatment guidance was considered a sweeping success: incidences, hospitalizations and deaths attributable to VZV fell dramatically following 1996, more than 90 percent, 70 percent and 88 percent respectively. Yet, in spite of this, the natural cautiousness of the CDC’s initial recommendation led to some disease researchers noticing a lingering trend of sporadic VZV outbreaks in schools where the majority of the child population was already vaccinated.

What was behind this vulnerability? Many quickly pinpointed that these populations were the only ones that received the single dose of the vaccine. The CDC itself, when it published its 1995 guidance, had noted that, in spite of higher first-dose seroconversion rates than their adult counterparts — 97 percent versus 78 percent — it lacked the follow-up research on children 13 years old or younger to know whether or not a second dose was required.

By proceeding with this single dose recommendation for children, the CDC unintentionally may have left some children vulnerable to the virus after their initial vaccination. In 2006 the CDC amended this guidance, now specifying that children should have a routine 2-dose schedule at ages 12–15 months and 4–6 years. 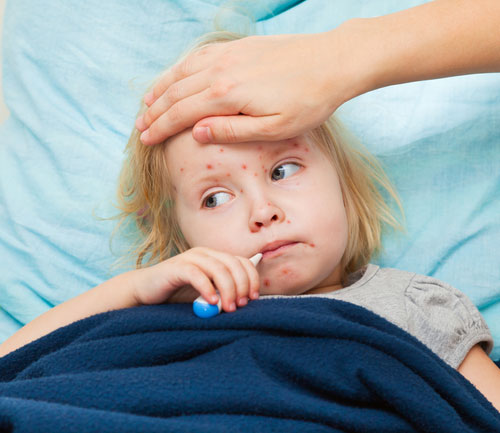 Impressive results
Following this adjustment, Dana Perella, Master of Science in Public Health, surveillance coordinator working with the Philadelphia Department of Public Health, and a team of researchers set out to measure the results. By their estimation — with findings published in the journal Pediatrics — this new childhood treatment regimen was nearly 100 percent effective.

“A second dose of varicella vaccine provides school-aged children with better protection against the chickenpox virus, compared to one dose alone or no vaccination,” Perella told HealthDay. “With improved protection provided by two-dose varicella vaccination compared with one-dose only, continued decreases in the occurrence of chickenpox, including more severe infections and hospitalizations, are expected as more children routinely receive dose two between the ages of 4 and 6 years.”

The diligence of public health officers and immunization managers exploring the impact of additional VZV vaccinations for at-risk populations can be tied directly to reduced rates of chickenpox infection and adverse effects. As such, this new dosage regimen has been made a standard admission requirement in many schools.

Centers for Disease Control and Prevention – Epidemiology of Varicella