Epidemiology vs. Biostatistics: Understanding Their Roles in Public Health 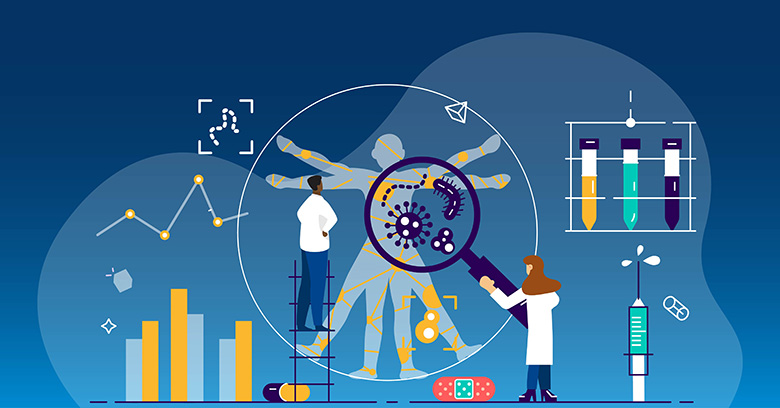 Where do illnesses come from? Why do some people become sick while others remain well? Which diseases are most prevalent in a given city, state or community, or among a particular population group? These and other relevant questions have been important to answer for centuries, and they have become even more prominent since the rise of the COVID-19 pandemic.

Each of these questions is critical to the field of public health, in which professionals seek to promote the physical health and well-being of entire populations. To help answer these questions, and ultimately to advance better health outcomes, public health experts rely on the scientific disciplines of epidemiology and biostatistics.

These disciplines, while overlapping in several ways, are distinct from each other. This article will consider the similarities and differences in epidemiology vs. biostatistics, as well as the roles that both disciplines play in promoting public health.

Epidemiology is a health care discipline with an important distinction: The “patient” isn’t defined as being an individual, but rather as an entire community or population. Specifically, epidemiology uses science, systems-thinking and data to determine the underlying causes of different diseases and health outcomes in a population.

Epidemiologists tend to focus on two areas: distribution and determination.

With a full understanding of distribution and determination, epidemiologists can implement strategies that can treat, control and ultimately prevent the spread of disease.

The Scope of Epidemiology

The work of epidemiologists encompasses a wide range of issues. The Centers for Disease Control and Prevention (CDC) lists six categories in epidemiology.

Epidemiologists may study any environmental exposures that contribute to population sickness or wellness. For example, what’s the local air quality? Are there potent allergens or asthma triggers? Does the local water supply contain any harmful substances?

Epidemiology concerns itself with infectious diseases as well, which may include anything from foodborne illness to seasonal flu. Historically, epidemiology has played a vital role in developing a clear understanding of pandemics such as typhoid and cholera.

Noninfectious diseases can include a local risk for a particular type of cancer, birth defects or a high rate of diabetes in a particular community. Epidemiologists may study the potential factors that contribute to these and other conditions.

Epidemiology also includes the study of injuries, such as local rates of gun violence or homicide. Researchers consider factors that make these injuries more likely and also explore their impact on the community’s physical and emotional well-being.

A natural disaster’s short- and long-term effects may warrant epidemiological study. Natural disasters can include anything from hurricanes to wildfires to earthquakes.

A final category for epidemiological study is terrorism. According to the CDC, professionals in the epidemiology field may study the effects of incidents like the World Trade Center attacks or biochemical weapons deployment. 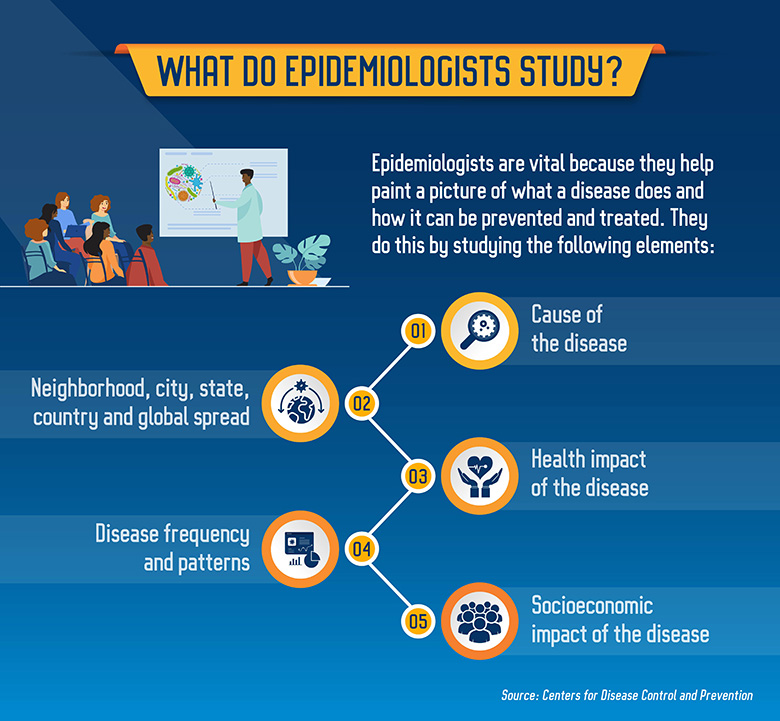 What Do Epidemiologists Study?

Epidemiologists are concerned with how common or rare a disease may be as well as any potential patterns to its development. For example, does the disease occur more frequently in men or women? Does it occur in certain age groups? Does it occur during certain seasons?

Epidemiologists also look at some of the underlying factors that make an individual or a population more prone to adverse health outcomes. These factors could be physical, such as climate- or geography-related; biological, such as disease transmission via insects; or socioeconomic, including variables such as health service availability or sanitation.

Epidemiologists may ask which populations does a disease seem to most acutely affect? Has the disease spread beyond a particular neighborhood, city or state, or is it more contained?

Epidemiologists study the overall impact of a disease or health event on a population’s physical and mental well-being. Epidemiologists may also consider any related social or economic disruptions.

Resources on the Study of Epidemiology

For further exploration of what epidemiologists study, consider the following resources.

What Is the Role of Epidemiology in Public Health?

History provides many examples of how epidemiologists have played a role in promoting health, curbing the spread of disease and developing strategies to address widespread illnesses.

Thanks to epidemiologists, we know that typhoid is widely associated with poor sanitation and dirty water. This information is useful not only in identifying high-risk areas but also in preventing a typhoid outbreak.

Epidemiologists also discovered that cholera comes from contaminants found in feces, which can sometimes be spread to food and water sources due to overall lack of sanitation and hygiene.

The work of epidemiologists in determining the sources of food- and waterborne disease can lead to technological advances that produce safer water and better sanitation.

Many famous epidemiologists have contributed to the field of public health. A few noteworthy examples include the following:

Resources on the Role of Epidemiology in Public Health

To find out more about epidemiology’s role in public health, check out these resources:

Biostatistics is often considered in conjunction with epidemiology. While they are related, these disciplines aren’t the same, and it’s important to understand the differences.

Biostatistics, which is also called biometry, studies biological phenomena through the use of mathematical principles, statistical modeling, methodologies and processes. A biostatistician may design a biological experiment, and then collect and interpret the data that the experiment yields.

Biostatistics provides the foundation of much epidemiological research. In other words, epidemiologists often use biostatistical principles and methods to draw data-backed mathematical conclusions about population health issues.

What Do Biostatisticians Study?

Biostatisticians may study diseases, disorders and health risks associated with certain behaviors or the local environment. They are typically employed by health departments on the federal, state or regional level.

Biostatistics is considered one of the foundational disciplines in public health. Specifically, biostatisticians conduct quantitative and qualitative research to help identify population health trends and risk factors. This work may involve several methodologies, including the following:

Through these and other methodologies, biostatisticians gather and analyze data, which may lead them to statistically significant conclusions about how different diseases originate or spread. These findings often provide clues as to how these diseases may be controlled, prevented or eradicated.

For examples of what biostatistics may look like in practice, consider the following:

How Findings Are Presented

The results of biostatistical studies may be shared with other researchers in the epidemiology field or even be made available to the general public. Typically, this information is presented in one of the following ways:

What Is the Role of Biostatistics in Public Health?

Biostatisticians have played a longstanding role in oncology, designing experiments to better understand how and why cancers form and how they may be effectively treated. Biostatistical research in oncology includes a wide range of clinical trials, focusing on patient populations of different sizes and at different stages of treatment. Through these trials, researchers have developed a greater understanding of genetic markers that make a person more or less at risk for different kinds of cancer.

Biostatisticians also build statistical models to understand various factors that may contribute to chronic diseases apart from cancer, such as heart disease, diabetes or stroke. Their findings can be applied to strategies to mitigate or prevent these conditions.

Additionally, public health professionals who work in biostatistics have conducted important investigations on how air pollution, water contamination and other environmental factors may impact a local population’s well-being. Through surveys, clinical trials and field observation, biostatisticians have made important discoveries about toxic substances and hazardous waste and their possible impact on different populations, links between local infrastructure and population health, and even the effects of climate change on different communities.

The inferences can help clinicians identify patients who may be at a higher risk for certain conditions, making preventive treatment a possibility.

Biostatistical research has also provided benchmarks and reference points for normal human growth and development. By surveying growth trends across broad sample sizes, researchers have developed a better understanding of how children and adolescents grow, which factors support healthy growth and which factors may stunt it.

Resources on Biostatistics in Public Health

To find out more about biostatistics, especially regarding population health, take a look at these resources: 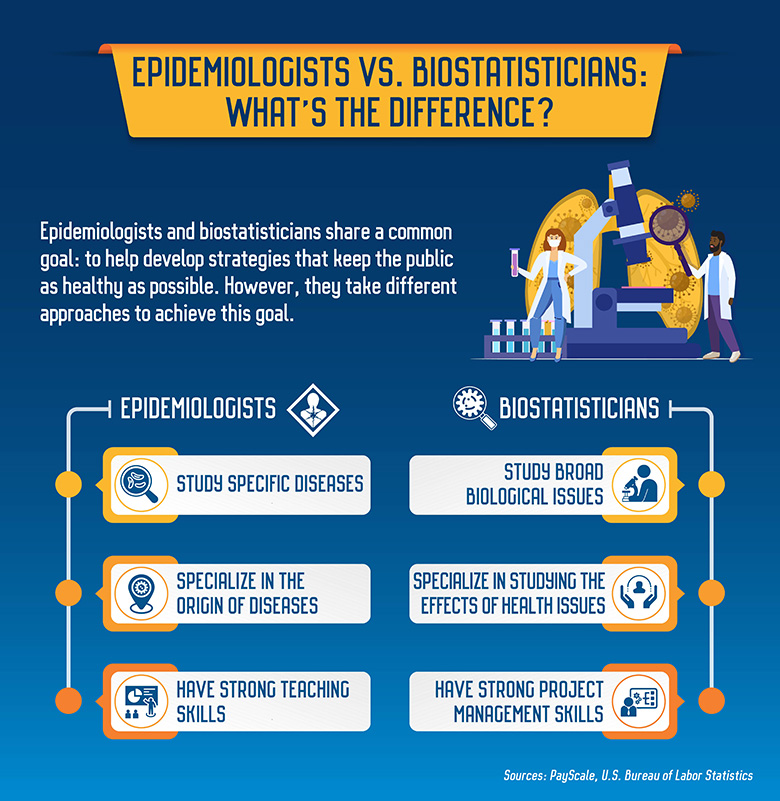 What Is the Difference Between Epidemiology and Biostatistics?

Biostatistics and epidemiology are often seen as closely related. There is a reason for this. Both fields consider population health concerns, and both fields have the ultimate goal of promoting overall health and disease prevention in a specific community.

Biostatistics may be understood as one of the tools that epidemiology employs; that is, an epidemiologist may use biostatistics principles to help process data and make helpful inferences.

Despite their overlaps, there are many differences to explore when comparing epidemiology vs. biostatistics:

To keep communities safe and healthy, public officials need to have a clear understanding of different factors that impact the health of individuals and the population as a whole. Through scientific inquiry, both epidemiology and biostatistics provide this understanding and lay a foundation for greater health and well-being throughout our communities.

What Are the Top Public Health Concerns Today and How Are They Determined?

What Is the Difference Between Public Health and Community Health?

Why is Public Health Important?